English essay #2 If Beethoven lived as a scientist

In addition to the 2020th anniversary of Jesus Christ, this year is to be cerebrated for the 250th anniversary of Ludwig van Beethoven. You might have enjoyed the frequent broadcasting of his music all though this year. So, did I.

Not only music, many program focus subjects into his life, things around him, or of his time, and tell that he was the pioneering musician to present his music directly to citizen: They tell that, in those days, musicians were commonly employed, or sponsored, by aristocrats or churches, where they created and played music for the entertainment, for the pray, or for the special events of their patrons. Then, Beethoven began to present his music in a public hall.  By doing so, he could share heartfelt moments with people at large, while people could directly support his life.  In addition, they tell that, in his late period, he was supported by an aristocrat, with a pension provided by him, as many musicians of his time were so supported.

To me, it was striking to hear this story since many pieces of his music produced in his late period are so different from those in his middle age: His late period pieces sound peaceful and harmonious, while those in his middle age vivid, serious, and even aggressive sometime. I thought this difference may be due to his age. But now I think it might be wrong, at least in part.

Here, I fantastically imagine if Beethoven were to appear as a scientist in this critical moment of pandemic, responding directly to people with all of his talent, passion, and scientific achievement, while people respond him through supporting his life, and thus they share life together．

If that could happen, I am wondering how differently may science develop, from the current way of its development:

In the current situation, people at large may think that they, scientists, must know much about nature, about the battle of human body against the virus, for example, and wonder why they do not speak to people directly about the secret of life that they have privilege to access.

Many scientists, on the other hand, may answer to people, saying that they are already committed to pursue one or other research projects of great social importance, and therefore, need not to respond to people’s direct requests.  Their answer may be acceptable since each of most current research projects is sponsored either by the government of a country, by a large joint-stock companies, or by one of international organizations.

Yes, involved in one of those projects, scientists may be working with strong motivation for the welfare of people if indirectly.

Nevertheless, one may say that most current scientists are working in the situation being reminiscent of those musicians in the time before Beethoven. I wonder how much differently science may develop, if they work for, and supported by, people directly.

I should add a word here, that I am not denying the importance of the current system, which may give stable economical bases to number of scientists, and imagine a combination of indirect system and direct system might be the best choice. 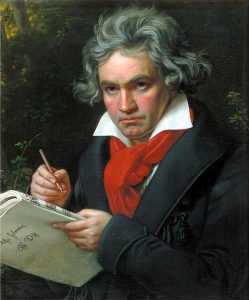